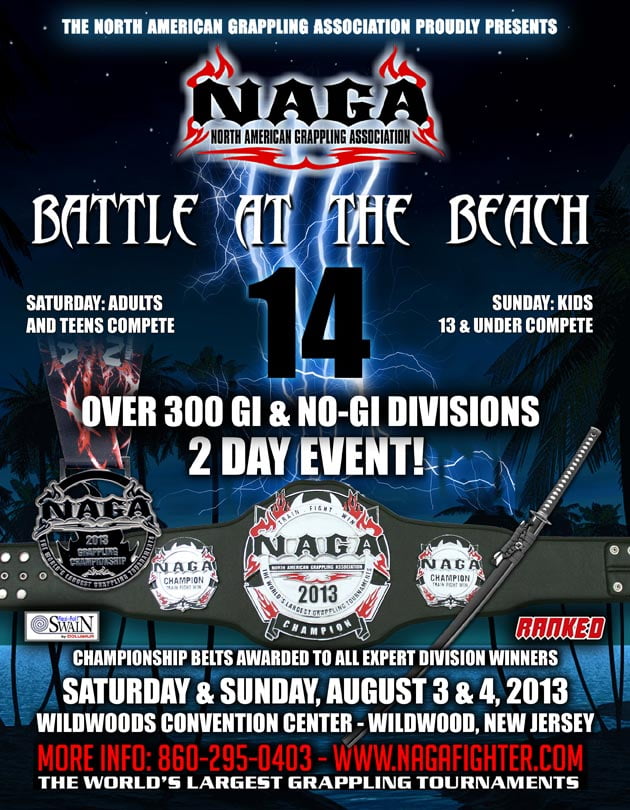 Komar Jiu Jitsu sent 11 competitors to the NAGA Battle at the Beach in Wildwood NJ on August 3rd and 4th. Those competitors returned with 14 medals, 5 gold, 4 silver and 5 bronze. All of our Team help prepare these competitors for this event and the effort payed off. The following students medaled;

Stephen Mcgee; Gold medal at masters no gi over 200lbs. Steve weighted in at 210 and his finals match was against an opponent who weight well over 265lbs. Steve also won a Gold medal in the Brown Belt masters gi division.

Mike Palmer; Gold medal at adult Blue Belt gi 140 to 149lbs. Mike frequently trains with Eddie and they go back and forth. Mike and Eddie decided to split the Gi and No Gi division each taking their better event.

Daniel Ramiez; Gold medal teen expert gi 150 to 159lbs. Daniel faced a very tough opponent in the finals of the gi division. This was a rematch of their no gi finals in which Daniel took Silver. They will see each other in High School wrestling tournaments this year at 152lbs.

Kekaha Kaneshiro; Silver adult gi 140 to 149lbs. Kekaha met Mike Palmer in the finals and lost on points. It was a tough match each taking their stronger position Kekaha pulled guard which Mike was happy to allow. Mike prefers to pass.

Richard Reinhold; Silver medal adult gi under 199lbs. Rich recently earned his blue belt and stepped up in a big way at his first tournament as a blue belt. He faced some tough players one who chose to sleep instead of tap.

Michael Czapcynski; Silver adult gi 150 to 159lbs. Mikes first time competing and he did an excellent job. I was able to coach his 1st match as he had to come back from being down on points to win.

Ivis Rios; Bronze medal adult gi 170to 199lbs. Ivis was competing for the 1st time as well. He had a tough start to the day losing his 1st match and not being sure if he wanted to continue. After some coach by Steve Mcgee he came back in the consolations and placed 3rd.

Jonathon Nunez; Bronze medal no-gi 10-11 year old expert 60to 69lbs. Jon was dominating his 1st match and when the ref stopped the match to move the players ack to the middle Jon got sick and was DQ’d. Being the courages kid he is Jon came back and won the consolations and took 3rd. Jon also won Bronze in his Gi division.