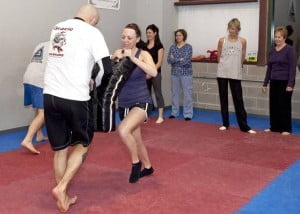 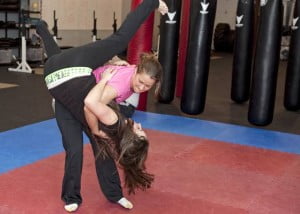 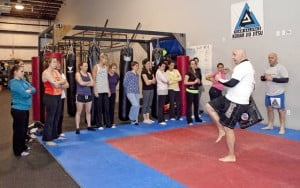 Press of Atlantic City came into Komar Jiu Jitsu during one of our womens’ self defense classes and took several pictures and wrote a nice article. 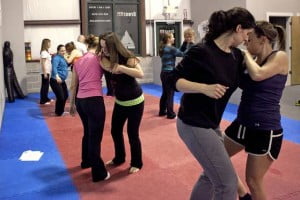 Last Monday, more than two dozen women came out to learn how to defend themselves.

Diana Campbell enjoyed the first lesson so much that she brought her friend, Ruth Quinn, to the second. The Cardiff women practiced avoiding, and lessening the blow of, each other’s punches.

“It’s good exercise, and it’s good because, god forbid something ever happened, I’d know how to not to die,” Campbell said, laughing. “I thought it was great. I’m going to keep up with. I encourage women to do it.”

Komar, who was a member of the Galloway Township Police Department for 25 years, said self-defense is an important skill regardless of where you live.

“Most women that are victimized, it’s domestic-related,” he said. “Or it’s someone they know. It’s a boyfriend. It’s a girlfriend’s brother. Some people think, ‘Hey, I live in this nice neighborhood. Nothing’s ever going to happen to me.’ It happens in every corner of society. Everywhere. We’re all a potential victim for someone who sees an opportunity to take advantage of us. The idea is to give you a chance to defend yourself against that opportunistic person.”

Komar broke the class into pairs and showed them how to best escape if they are knocked to the ground. He was serious about teaching but kept the class light and comfortable by explaining everything in simple terms.

Do I Look Serious? I am Seriously into BJJ